Last major release for 2021. This version brings some enhancements and a few new tools

The idea was to set up a framework that will allow to have a more optimized Array tools and be able to the features. Part off this work derived in replacing the old and feature-similar panelling tool. For now, the changes introduced are these:

“Paneling tool”, is now more interactive, with more interaction in the viewport and less in the UI. Behaving similar to 2D Array tool. The results will be the same, but is easier and faster to use. If you want to use an object as panel model, start the tools selecting first that object, if no object is selected default boxes will be created The interface now contains just thickness and cap parameters that are easier to preview. For a more detailed list of changes, refer to the user guide. 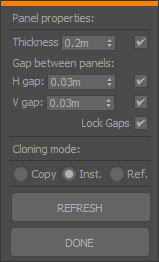 (Video will be added soon)

First attempt to introduce a more direct modelling oriented tool. Its objective is to provide a quick way to “stamp” an object into another or cut holes on the surface. Some use cases could be to imprint a shape in a jar, detail a wall, cut holes in a ceiling to add recessed lamps…

(Video will be added soon)

major fixes includes the correction of a problem with the eyedropper tool, that caused the display of an error dialog after one use. Also, Drop Objects tool did not work as expected when the target object’s pivot was displaced and the Distribute tool was practically broken in the latest release.

We have on plan a must needed remake some of the demo videos, and complete new ones for more of the main tools

You may also enjoy

Usual problems with DesignToolBox and how to fix them

Error opening 3ds Max After reinstalling the or updating the tool, this annoying error can occur sometimes: It is caused by the ribbon interface. Some icon...

Mid-year release for 2022. This version adds a couple of tools and fix some major problems encountered. Big thanks to all the users who suggested new feature...

First release for 2022. This version brings some enhancements and brand new UI icons (Due to a data loss, the icons had to be redone. The new aesthetic is mo...

List of available tools, in table format has been added. It includes a description for each one, and a short usage instruction. Access it here